Bitwig Studio (for Linux) can no longer use (freezes on) ALSA audio interfaces as of version >= 1.2.0

This is an utterly infuriating problem. I cracked it today by going to Store DJ, which kindly let me sit and play around with a lot of their interface that were on display. I thought this was actually a problem with the audio interface, because I always felt it was a fluke that my interface worked in the first place, since it was a very Windows/OSX-oriented interface, but alas, it is a bug in Bitwig Studio.

After upgrading to Bitwig Studio 1.2.0 on Linux, you find that your audio interface is still recognised and configurable, but can't be used in any way. This culminates in transport not progressing when you press "Play", and no audio coming in when you hit record. 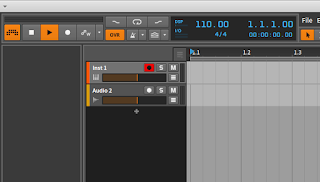 Transport started ("Play" pressed), but transport time not advancing (nothing is playing/recording).


You will observe the same with recording. There will be no transport and nothing will record when you try to use the interface with a version higher than 1.2.0.

This is actually a bug in Bitwig Studio, and after much strace/gdb action, I can tell you that it has to do with the way that Bitwig Studio parses the configuration files. It appears that as of version 1.2.0 and beyond, Bitwig Studio parses configuration files in a different way; possibly the format/layout is incompatible. This results in some stale configuration that can never be erased from the preferences file, even if you change that very preference. There's another manifestation of this, and that is the name of the interface being the name of an old interface, even if a different one is plugged in and the old one is not.

Name of the interface will be that of the old, stale interface that erroneously can never be changed.

Luckily there is a simple solution... erase your preferences files.

This will not erase your license key. That's kept in another file.

You'll need to configure everything from scratch; yes, it's annoying.